Court Marriage – Money is Not Everything, Relationships are Also Important.

It is Sunday, no one is a rush in the morning. Everyone woke up at around seven o’clock. She brought tea for all the family members and gave it to everyone in the family. She went to the balcony and heard her mother-in-law’s loud voice-“Bahu is your younger sister’s relationship confirmed or not.” And she whispered-“No Maa Ji, not yet, in conversation with a few”.

“What about the relationship we told, the one who is a Babu in the government department, is so good. Everyone’s fate is not like yours,  who gets married to such a good boy in such a big house. And then your sister earns so well if the boy earns even a little less then what will go wrong. And never the less money is not everything, if money is a major concern, you can get them to court marriage. If you will dream high, you will have to pay more. “Mother-in-law said it with a wicked smile.

She replied expressing her anger into sarcasm -“Ji Manji, my father spent all his savings in paying for the cost of my marriage, is over. Dad’s village land was sold because even then he thought that money is not everything, he was all ready for the daughter’s happiness.

Therefore, there is nothing left to give in the marriage of the younger sister. Perhaps the father will have to marry her to a boy earning less than her. I wish you also had the thought that money is not everything at the time of your son’s marriage. “Manji said angrily that “We were getting an earning girl along with dowry, but we never gave money priority.

We thought that if a domestic girl comes to our home, she will be more Cultured, but that’s not in my fate. In the morning, all I had to do was to hear this good thing from your mouth. My son too became a slave of yours, otherwise, you would never have the courage to say all this” and started crying. 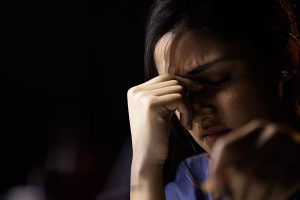 Hearing all this noise, her husband came out of the room and asked her mother about the issue-“What happened Maa? why are you crying in the morning? “Daughter-in-law replied in the slow voice” Maa Ji, the boy you are suggesting for my sister is Babu, not an officer, condition at my home is not that bad that I suggest them to arrange her marriage with any boy.

She earns well, so she has some dreams for marriage, and she won’t marry such a boy, also I cannot tell my parents about this boy. “Hearing that her mother-in-law stepped up and slapped her. Her husband said in anger “beware if you ever dare to speak like this to my mother, do you have any respect for elders, I am watching this for so long, you are standing here and talking to my mother disrespectfully”.

She started to cry and went to her room thinking about why is this happening, had it happened if she was settled, and earning herself.

After some time, she called her younger sister and talked about random kinds of stuff, her sister hesitantly told that she likes a boy and both want to get married. After knowing all about the boy, he talked to his parents and told them that the boy belongs to a very good family, does a good job.

His family members had no objection. The only problem in front of them was that they did not have enough capital left to marry his second daughter with grandeur. She got a thought in his mind why not go for Court Marriage. She talked to the housemates about this and also to the boy’s family, Nobody had any objection as they were educated and open-minded.

She read about Aapka Advocate on the net. Then she went to Aapka Advocate’s website and took Phone Consultation. Her Advocate heard the whole thing and told her the right way of court marriage. The marriage of her sister has been completed for a year. Both are very happy in their lives.

She is happy to see both of them happy, but her own life became worse than hell, every day she listens to abuses from her husband, mother-in-law. She could not understand anything.

She could not even live in that house. She told this to her younger sister. Her sister advised that once again she should take Phone Consultation in Aapka Advocate. And get advice from them on this subject.

What Rights does a Husband have During a Divorce in India?

SC : Transnational Child Custody of a Minor in Mirror Order.

Some Tips For Selecting The Best Family Lawyer in India.

Is It Possible to File an FIR Under 498A After Divorce?