The following persons are considered to be legal heirs and can claim a legal heir certificate under Indian law:

Use of Legal Heir Certificate: –

A legal successor certificate is required for the following purpose:

Generally, for the purchase or registration of any property, the buyer must request a legal heir certificate to ascertain the ownership of the property. There may be instances where there are several legal heirs to the ancestral
property and in such cases, it is necessary that all the legal heirs sign the deed giving their consent to avoid any lawsuits.

The legal heir certificate can be obtained from the area/taluk tahsildar, or from the corporation / municipal office of the concerned area and the district civil court. This certificate has the names of all the legal heirs of the
deceased person and is issued only after proper investigation.

The steps listed below include the process of obtaining a legal heir certificate:


With a signed application. This application should include the names of all legal heirs, their relationship with the deceased, and addresses of family members. The death certificate of the deceased person should also be attached. (Death
certificate should be obtained from Municipal / Corporation office).

The process of obtaining a legal heir certificate usually takes 30 days. If there is an unnecessary delay in obtaining this certificate or the officials concerned fail to respond, you should contact the Revenue Department Officer (RDO)
/ Sub-Collector. 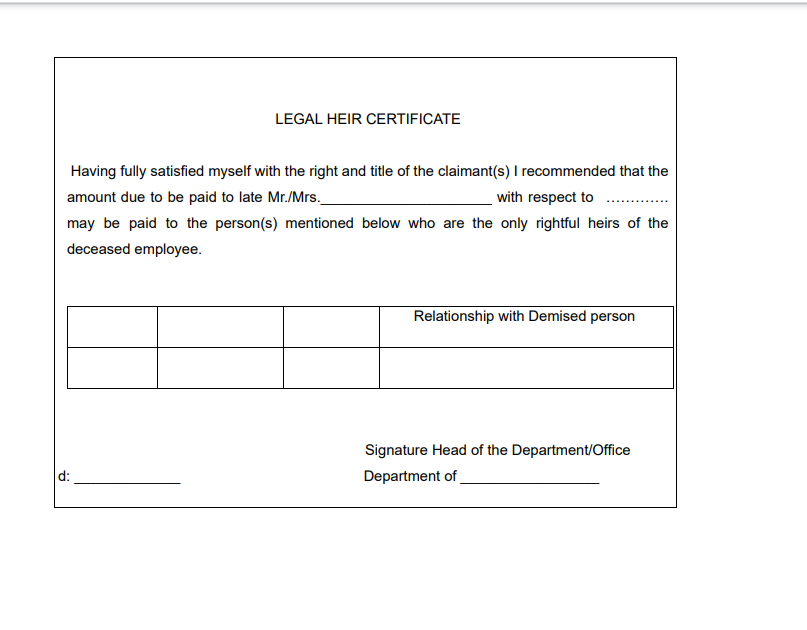 Heir means any person, man or woman, who is entitled to succeed to the property of an inlet (a person dying without a will).

For a male Hindu, here is an explanation of who is the legal heir with their inheritance rights over the property.

Being relatives specified in class I of the Schedule to the Hindu Successor Act, the property of a male Hindu dying shall first go to the heirs. Here is a list of legal heirs under Hindu Personal Law.

The inheritance of the property shall be to the exclusion of the same and all other heirs.

Who can obtain a legal heir certificate if there is no surviving heir from the above list?

The Legal Heir of a female Hindu: –

Here is a list of legal heirs of a female Hindu under the succession law. A woman will destroy the property of a Hindu dying,

In the absence of any woman inheriting property from her husband or from her father-in-law, any son or daughter of the deceased (including children of any pre-deceased son or daughter) on the husband’s heirs.

Legal inheritance of Muslims under Sharia law in India: –

Following is the list of legal heirs, under Sharia law.

Who is the legal heir under Christian law?

For example, under section 32 of the Indian Succession Act, 1925, a Christian legal heir is a wife, a husband, or a family of the deceased.

Who is the legal heir under Parsi law?

Under Section 54 of the Indian Succession Act, 1925, a legal heir under Parsi personal laws are as follows:

In this case, a Parsi Indian neither dies with a descendant nor a widow or widower is entitled to the following property:

Can a child born in a live-in relationship be a legal heir in India?

In a landmark judgment in 2008, the Supreme Court of India in Vidyadhari v / s Sukharana Bai gave inheritance rights to children born in a live-in relationship and thus gave them the status of “legal heirs”.

To obtain a legal heir certificate, the following is a list of the required documents:

What are Consumer Rights in India and Their Importance?

What is a Succession Certificate and Its Procedure to Obtain?